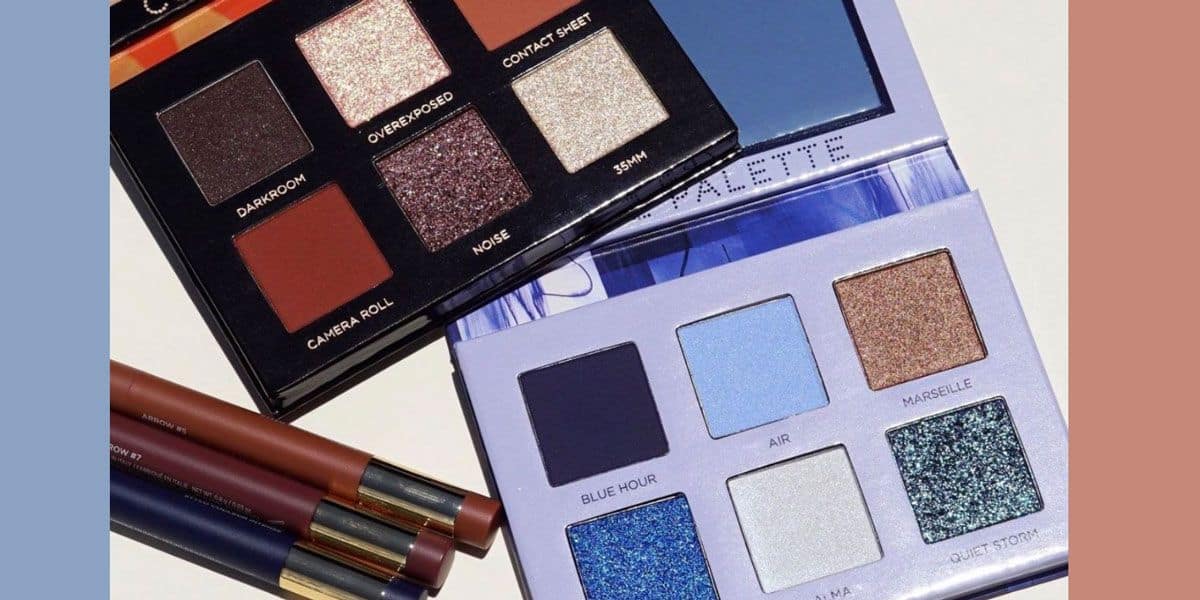 If you love cute makeup, you’re in the right place! Nabla Cosmetics has just announced its new Cutie Collection. It consists of two Cutie eyeshadow palettes and 3 new shades of their iconic Arrow Stylo Pencils.

These aren’t the first Cutie palettes, but they are lovely additions! The other Cutie palettes are more neutral-based and not quite as out there as these new ones, so these make a nice change!

Nabla Cosmetics is known for its awesome makeup that’s fuss-free and of amazing quality- check out our latest review on their Skin Realist Tinted Balm. The Cutie Collection is no different!

The Cutie Palette Analogue is in Nabla’s words: “formed by timeless nuances, diffused light, focus shifts and sea glimmer”. To put it into basic English, it’s a neutral palette with warm tones and lots of shimmer and glitter.

It has 6 shades with 4 shimmers and 2 mattes. I would say the palette is split into 3 shade variations, the white pearled bright shimmers, the matte burnt orangey shades and the deep dark maroon shimmers.

For an eyeshadow palette that only has 6 shades, there isn’t too much variation. However, I guess that’s the point of it, no?! Either way, I love the colours, it’s a cutie palette that’s for sure!

Taking on a nighttime approach, we have the Cutie Palette Midnight which is all about the blues!

There are quite a few blue eyeshadow palettes already on the market, but it’s one of those colours that can do with a little more competition. Probably, because fewer people are brave enough to rock a blue lid!

The Midnight palette comes with one matte and the rest are shimmers of all different degrees. It has 4 blue shades with one stunning dazzling shade called Quiet Storm.

These multi-use pencils by Nabla are an all-time favourite for many. It’s easy to see why! Imagine one makeup product that does it all.

Eyeshadow, eyeliner, lips and anything else you can think of. Yep, that’s the Cupid’s Arrow Longwear Stylos.

It’s a multi-use pencil that literally works as whichever makeup you fancy. Perfect for creating a simple monochromatic look and for slipping into your handbag on a long day out.

Cupid’s Arrow Longwear Stylos have already been released in 4 shades and Nabla is treating us to another 3 fabulous shades. The new shades are not as neutral as the original shades, but they fit into The Cutie Collection colour scheme very well with their blue and rusty shades.

Aside from the versatility of these pencils, they are also top quality! It has a creamy buttery formula that’s easy to apply and that lasts amazingly throughout the day.

Soft to apply, but set quickly these pencils have the best combination to offer! Get bold eyes and lips with this simple fuss-free pencil! It’s hard not to love it!

The Cutie Collection is exactly like its name, it’s cute! Not only is it cute, but it’s also useful too. My favourite part of the collection is the Stylos pencils.

In general, I love multi-tasking makeup because it’s time-saving and cost-effective. But, these pencils are also of amazing quality too.

What do you think of Nabla Cosmetics The Cutie Collection? Which piece in it is your favourite? Let me know in the comments below!

Nabla Cosmetics The Cutie Collection is available at Beauty Bay